by Merve Madakbaşı - mmadakbasi@chemorbis.com
The polymer imports of Turkey resumed growth, albeit to a small extent in 2019. The import volume totaled 4.8 million tons to indicate a yearly increase of 2.7%.

This followed a 6.5% decline in 2018 when polymer markets were hit hard by tough economic conditions amid the depreciation of Turkish lira against USD. 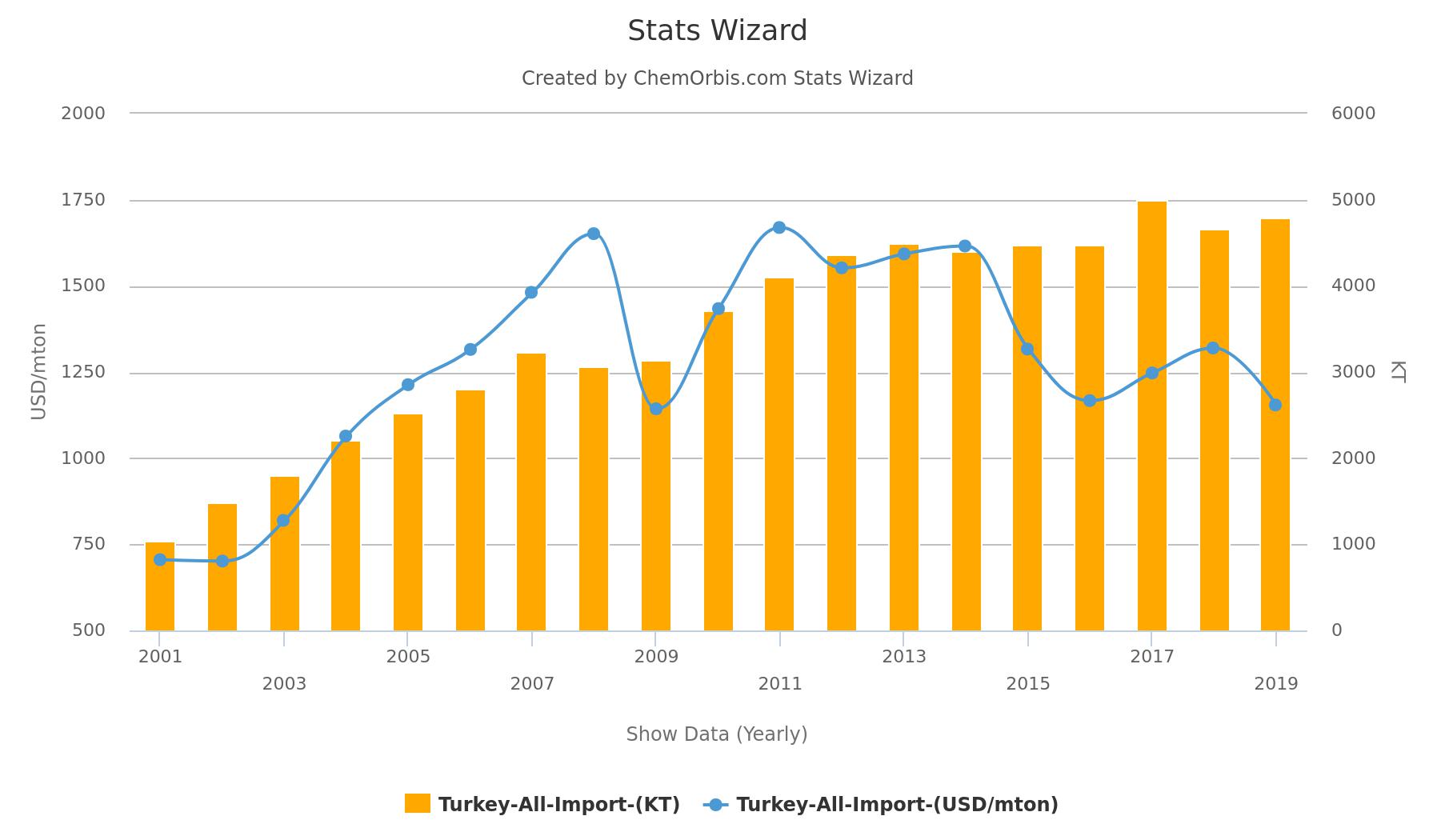 Turkey imported 1.7 million tons of PPH during 2019. This marked the largest import volume since 2001, when ChemOrbis started to collect data. For another year, Saudi Arabia was on the top of the list of largest suppliers by a long way.

According to ChemOrbis Import Statistics, the imports of PP copolymer in 2019 were 5% higher than the previous year. The figure pointed to the largest figure in 6 years, moreover.

The imports of S-PVC broke slightly below 600,000 tons last year and represented a 4% fall from 2018. Moreover, they indicated the lowest volume since 2009 .

France took the lead for another year with almost 145,000 tons of exports to Turkey, followed by Mexico and the USA, respectively.

Imports of LDPE and HDPE hit multi-year lows, too

LDPE imports sank almost 5% to 270,000 tons in January-December, pointing to their lowest volume in 4 years. The imports of HDPE registered a yearly drop of 2% and marked a 9-year low.

LLDPE volumes at record high, imports from the US doubled

Unlike LDPE and HDPE, the LLDPE imports of Turkey hit an all-time high last year. They reached the highest level since 2001, when ChemOrbis started to collect data, to stand at almost 540,000 tons. They also represented an increase of 8% from 2018.

The USA ranked the second LLDPE exporter of Turkey with over 155,000 tons following Saudi Arabia. Imports of US LLDPE skyrocketed when compared to 2018, data revealed. This was in sync with a trade tension between the US and China that led an increased influx from new US plants to Turkey and some other destinations.

The imports from Iran decreased by almost a third last year, while the country ranked the third largest supplier. The reduced volumes from Iran were in line with an anti-dumping duty of 11.3% that was imposed by Turkey on imports of PS originating from Iran in early 2019.
Belgium remained the top supplier of Turkey, followed by South Korea.

2019 imports for ABS were up by 6% from 2018. Meanwhile, Saudi Arabia overtook Taiwan’s place to become Turkey’s third largest supplier following Belgium. South Korea remained on the top of the list with imports of more than 75,000 tons throughout last year.

Turkey imported around 28,000 tons of EPS during last year, slumping by 55% year over year. Austria remained the top supplier of Turkey for the fifth straight year, as a side note.

Last year, Turkey’s total PET textile imports declined by 16%, while imports of bottle grade posted a sharper drop of more than 21% to stand at around 91,000 tons.