by Merve Madakbaşı - mmadakbasi@chemorbis.com
Muslim countries are readying to celebrate Eid al-Fitr holiday on May 24-26. Before leaving their desks, Turkish players voiced their post-holiday projections on a strong note based on supportive cost, supply and demand dynamics.

Polyolefins left the 2nd bullish week in a row behind

Import PP and PE prices reversed direction around mid-May. The markets yielded to an upward pressure from China, compared to where Turkey traded at a discount since mid-April regardless of traditional freight differences.

Additional factors that helped Turkey turn up were mainly as follows:

· Oil prices pared their massive losses in the recent weeks

*Right click the image and open in a new tab to view the full-sized snapshot.

Most PP and PE producers preferred to go to the sidelines after selling out their monthly quotas, while traders lifted their prices for their remaining cargos. Before prices bottomed out two weeks ago, PPH offers represented a loss of nearly 20-25% in total depending on product, while PE slumped 16-18% from March levels, the weekly average data from ChemOrbis Price Index revealed.

“Rising global crude benchmarks along with reduced oil output in May coupled with a comparative optimism generated by the easing of virus-led lockdowns propped up markets, obviously.”
A Global Trader

Crude oil prices moved up in response to cautiously improved demand outlook amid normalization plans around the world. Commercial crude oil inventories in the US declined for the second week in a row, revealed the Energy Information Administration (EIA) reports, contributing to the trend.

According to ChemOrbis Price Wizard, the weekly average price spiked 16% on ICE Brent Europe while WTI oil benchmark surged almost 27% when a weekly comparison is made.

This was not only mirrored in spot olefin markets of Asia, but also led to expectations of higher June monomer contracts in Europe.

A Turkish packager opined, “Higher ethane prices combined with suspended production at a US producer resulted in the fading of competitive American PE prices. Similarly, South Korean PP and PE producers started to hold their offers amid higher spot propylene and ethylene prices.”

Ahead of the official announcements, producers have shared their higher sell ideas for June cargos. Sellers are planning to push for higher PP raffia deals at $850/ton CIF Turkey for Saudi Arabian and Russian origins, while they intend to sell fibre at or above $900/ton.

US LLDPE c4 film and HDPE film offers are expected to emerge around $750/ton CFR Turkey, while Middle Eastern cargos may see $800/ton for these grades and $850/ton for LDPE film. 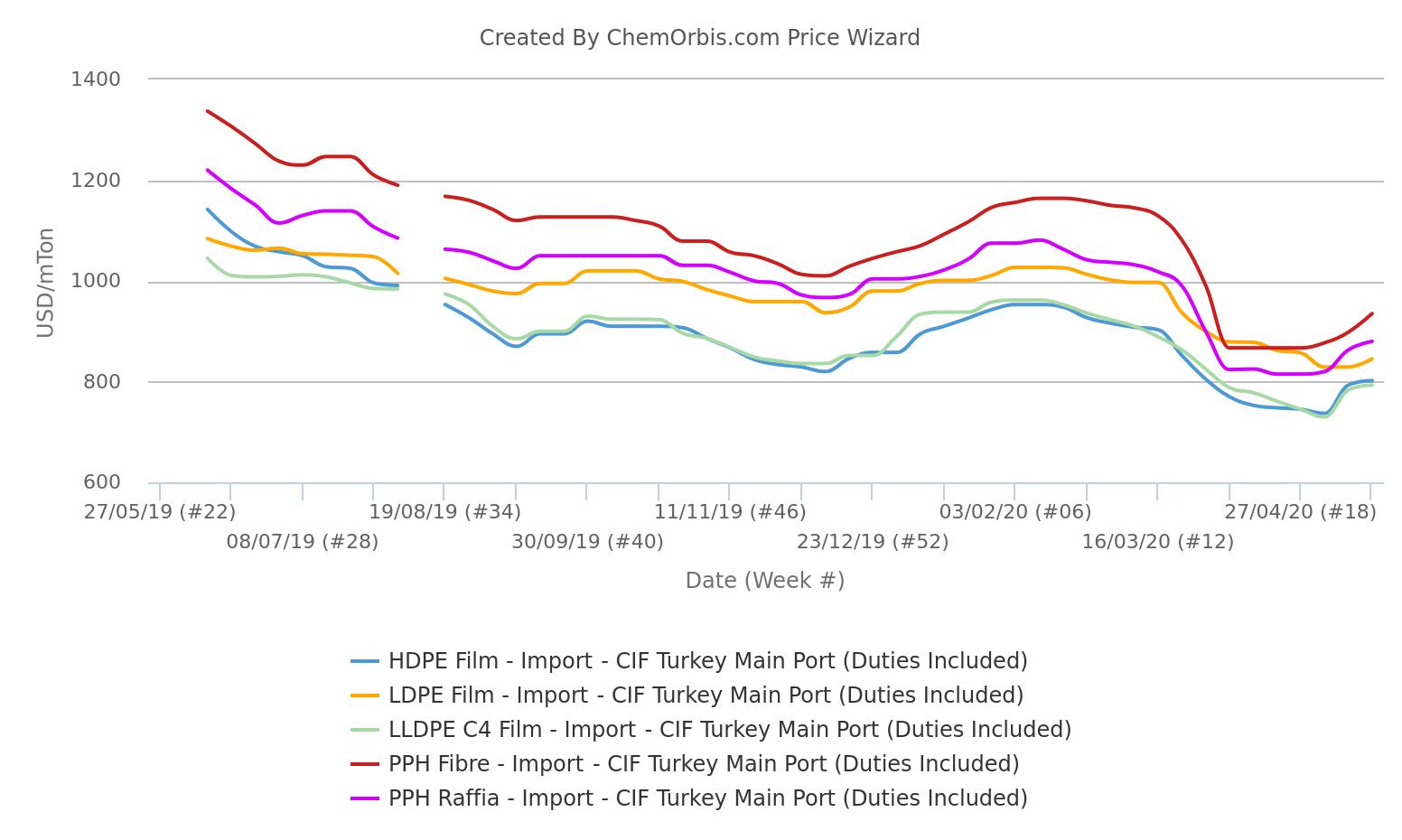 Buyers: Demand will have the final say

Polyolefin consumers agreed that further increases are on the horizon on the assumption that costs remain strong and hopes for improved export demand materialize after Eid al-Fitr holiday. Nonetheless, the fact that several buyers have already made safety stocks makes some players see dramatic hikes unlikely in June.

A seller also said, “We expect supply constraints for LDPE and LLDPE to lend support to rising offers. Still, the extent of price hikes may probably be determined by the state of demand.”

“The prevailing import prices in China support an upward trend in Turkey. Still, we should keep the fact that Chinese markets have been volatile since mid-April in mind. Besides, global demand may not resume pre-virus levels very soon amid the persisting clouds on major economies,” argued a buyer.