US HDPE imports near record-high in China, plunge in Turkey on negative netbacks

by ChemOrbis Editorial Team - content@chemorbis.com
According to data from ChemOrbis Import Statistics, imports of American HDPE spiked in China by 42% y-o-y during the first three quarters of 2017, nearing a record-high. The HDPE imports China made from the US in the first three quarters were even more than the imports made for the full quarters of the past few years. This was in spite of the reduced export allocations in September from the US given unexpected shutdowns stemming from devastative Hurricane Harvey in August.

However, export HDPE volumes from the US to Turkey plunged to in the same timeframe as the country turned to be a less attractive outlet amidst poor netbacks. Turkey’s HDPE imports from the US suggested a sharp drop of 80% between January and September year over year. The monthly import volume gradually declined starting from March to eventually sink to just 77 tons in September.

Turkish players would traditionally expect to receive attractive American HDPE offers towards the year-end, assuming that producers would deplete their stocks heading to the new year. However, this has not been the case since the last two years as Turkey does not promise healthy profits for American suppliers. This is because, Turkey’s HDPE market has been lacking the premium it should normally carry over China for the most part of the recent couple of years, as can be seen from the graph below prepared by ChemOrbis Price Wizard.

Let alone the premium, Turkey’s import HDPE film market has mostly traded at a discount compared China this year, except for a couple of short periods in January and mid-March. The gap between Turkey and China has reached the largest level since March 2013 to stand at around $180/ton this week. 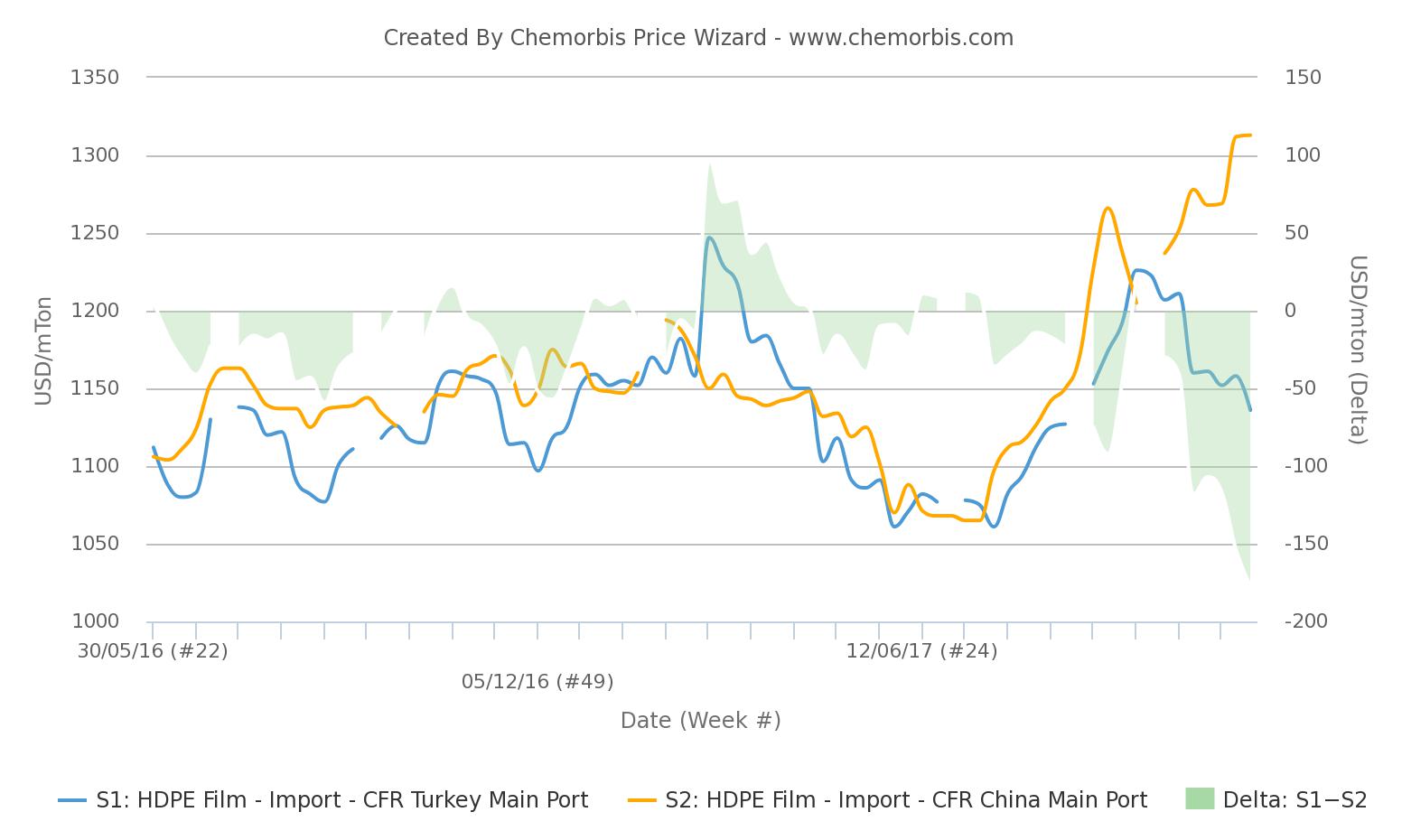 HDPE manufacturers in Turkey confirmed the lack of American offers in the market despite the new capacity additions from US PE producers this year. ExxonMobil (1.3 million t/y), Dow (400,000 t/y) and Chevron (500,000 t/y) brought new plants on-stream during 2017.

A buyer, meanwhile, noted, “We may hear a few prices for US cargoes during the Plast Eurasia Istanbul that will take place on December 6-9, 2017.” Most buyers, however, remarked, “US producers probably prefer to sell their export cargos to China, where they can obtain much better netbacks than Turkey. We may not see competitive offers from the US next month either.”

This week, players in China continue to report a firmer trend for import HDPE, unlike LDPE and LLDPE, as this product draws a better picture mainly due to tight supplies. As for American HDPE prices, players stated, “Some Chinese traders are preparing to source material from the US nowadays to sell here. We expect more prices to show up in the upcoming days.”