by Esra Ersöz - eersoz@chemorbis.com
The US PE production experienced serious challenges in the last quarter of 2020 as the devastating hurricane season resulted in several shutdowns and force majeure declarations. Needless to say, the crippling shortage of containers in the shipping industry has been growing since then, let alone shrinking.

Regardless of all these production and logistics hurdles in place in Q4, exports out of the US for three PE products, namely LDPE, HDPE and LLDPE, hit record highs in 2020, exceeding 10 million tons for the first time.

If it wasn’t for these challenges...

The US has become a net exporter of PE in tandem with the start-up of new capacities as exports have grown steadily and substantially in the past few years particularly after 2017. In 2020, the challenges appear to have hobbled the pace of growth as the yearly increase stood at around 11%. If it was not for all of these challenges, the yearly increase in exports could have been larger.

The main export destination for US PE was Mexico, closely followed by China. More than 20% of the overall PE exports were conducted to these two countries. More interestingly, PE exports to China two-folded in 2020 compared to 2019 in line with the subsiding trade war.

The regular nearby destinations in Americas including Mexico, Canada and Colombia saw a relatively moderate gain while exports to Turkey and Malaysia rose significantly by more than 20% as a result of healthier netbacks. In the meantime, PE exports to Belgium and Vietnam fell notably, particularly in the latter one. 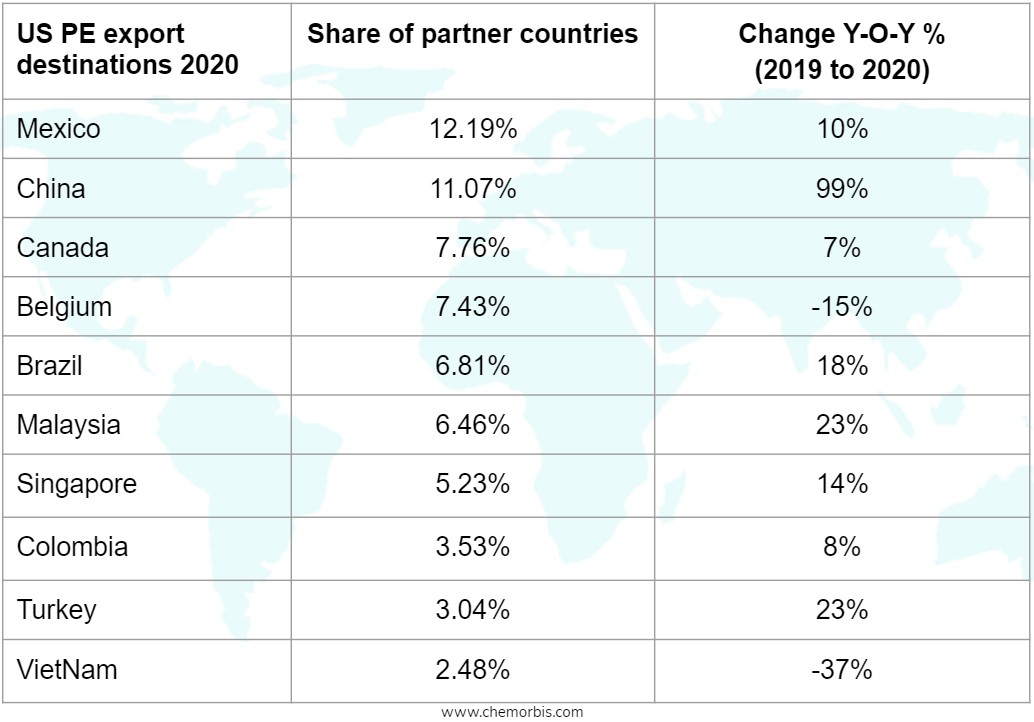