by Merve Madakbaşı - mmadakbasi@chemorbis.com
Inadequate supplies have led to gradual price hikes in Turkey’s PVC market since the middle of December. Reduced export availability from two major suppliers, namely the US and Europe, triggered buying interest and reinforced the upturn in January.

Import market rose by almost 5% since January kicked in

Steady price gains were extended into early 2020 as export volumes from the US remained quite limited even after the new year holidays. Overall, import PVC prices have gained almost 5% ($40/ton) since January started. According to ChemOrbis Product Snapshot below, European K67 offers were up by less than 4% ($35/ton) in the period, whereas the dutiable market soared more than 6% ($55/ton) on average.

American PVC suppliers mostly remained out of the market as the new year started. Players attributed the lack of offers to healthy domestic demand in the US and a scheduled shutdown on the side of PVC Formosa Plastics. Around 800,000 tons/year of PVC capacity of the company was slated to be offline for about a month-long turnaround. Moreover, volumes from other producers including Oxy, Westlake and Shintech were said to be modest.

US PVC K67 offers have hit $900/ton CFR Turkey, cash on the high end following further increases of $25/ton on the week. A profile manufacturer opined, “We found the latest offers unworkable while our $10-15/ton lower bids were rejected by our supplier. US producers blame their lack of availability while justifying their rising prices.”

Also, suppliers may have achieved healthy sales in China before the Lunar New Year holiday starts. “Early expectations for March were shaped by supply constraints for PVC and VCM in China which may have resulted in some pre-buying activity. This probably kept allocations limited to Turkey, apart from turnarounds,” some players marked.

European PVC cargos were sold with modest increases in January on the heels of delayed deliveries from the region, as Turkish buyers affirmed. The absence of Mexican, Ukrainian and Russian suppliers coupled with reduced cargos from nearby Egypt added to the firming regardless of the state of end product markets.

According to ChemOrbis Turkey Price Index, supply constraints sent European K67 prices to a 6-month high by the middle of January.

This was somehow unlike the case in Europe’s domestic markets, where supply was not affected much by strikes in France. In Italy, distributors wrapped up their business with monthly rollovers in line with ethylene contracts. Most of them admitted seeing tepid demand from their customers, while supply was more than comfortable.

Although early February expectations call for small increases in the next ethylene settlement based on gains in spot monomer prices, volatile naphtha and crude oil markets as well as unclear demand outlook for PVC may dim the scene in February.

The price gap between European and US origins has disappeared in the wake of more rapid gains for the latter one. Delta between the two was around $55/ton just two months ago, data from ChemOrbis reveal, before US K67 moved $5/ton above European prices on a weekly average this week. 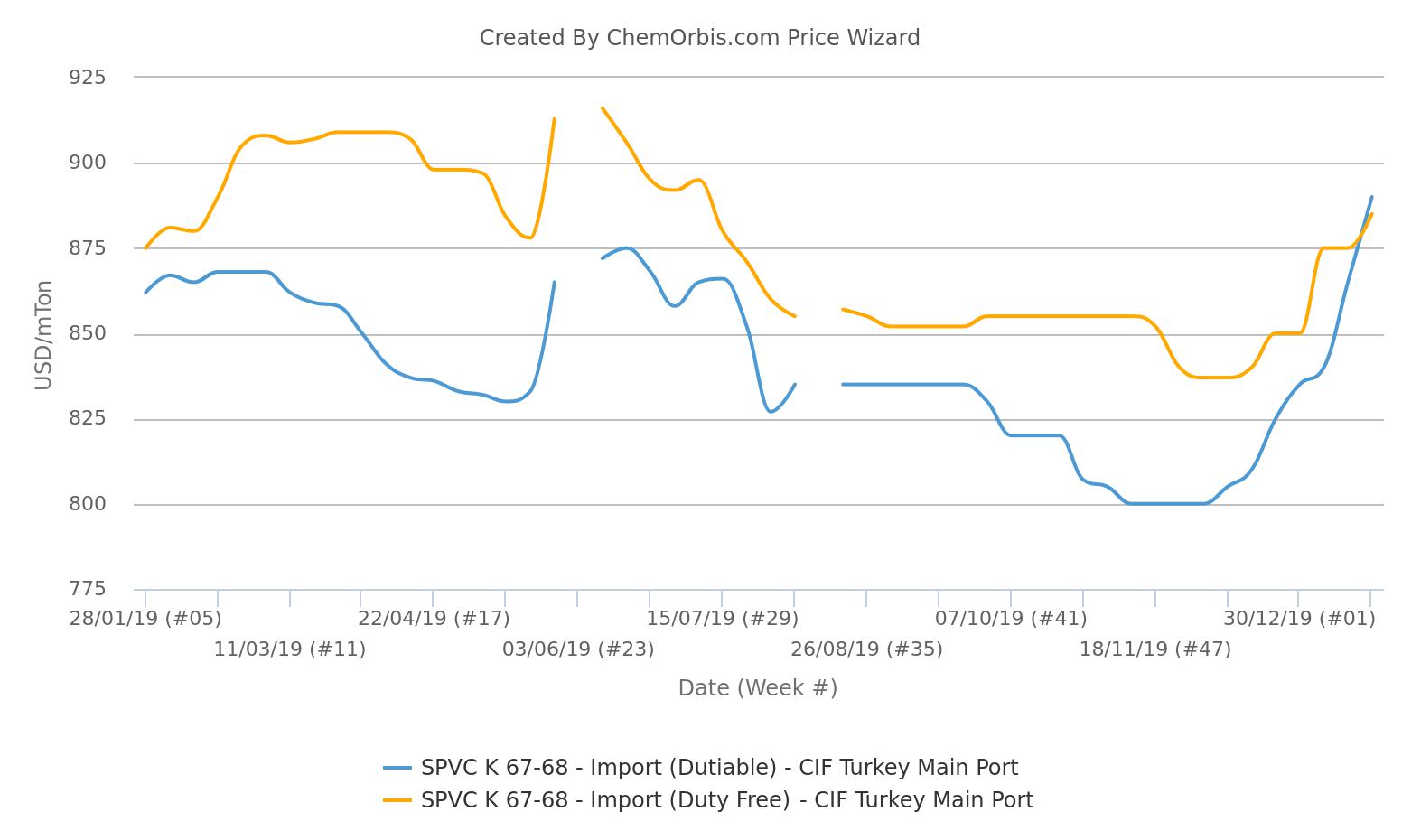 Players generally believe that the disappearing gap will hurt the competition power of US PVC in Turkey. They marked, “Longer delivery terms and compelling affordability may weigh on buying interest for American cargos considering the fact that they are offered on par with non-dutiable origins. Meanwhile European PVC may be set for some renewed hike attempts under these circumstances. ”