by ChemOrbis Editorial Team - content@chemorbis.com
The local ABS natural market was on a bullish trend since mid-December, last year in Turkey. Hitting the highest levels of the last 3 years on a weekly average in February, according to ChemOrbis Price Index, the local ABS market has seen the increasing trend losing speed recently. Overall, the ABS natural price range was reported at $2100-2150/ton ex-warehouse Turkey, cash not inc VAT, steady week over week.

The locally-held ABS natural market moved below imports by the middle of January amidst remarkable hikes in import prices and lackluster demand for local cargoes given the weak Turkish lira. In the first week of February, the market re-gained its premium over import ABS once again, meanwhile. 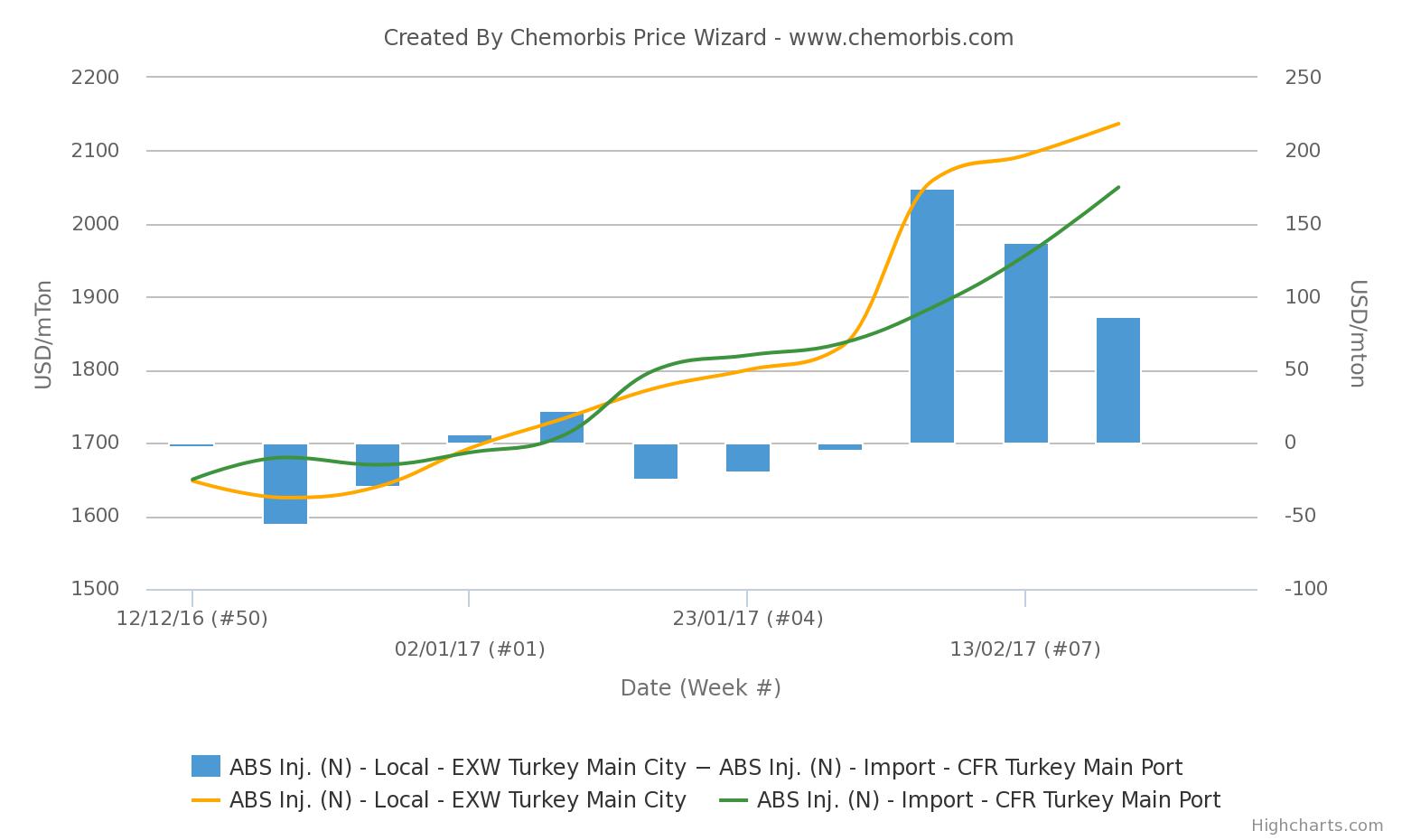 Players attributed the slowing hikes from distributors to the fact that most buyers went to the sidelines to monitor the upstream chain after making their monthly purchases earlier in February. “Spot styrene and butadiene costs in Asia were on a downwards correction over the last couple of weeks. We prefer to wait for new March prices to be unveiled by Asian ABS makers to decide our next step,” a converter noted.

A distributor commented, “We are still under upwards pressure from higher import ABS offers. However, demand for the upper ends cooled off recently after we received good buying interest from the white goods industry in particular. Thus, we plan to split our increase requests during March depending on the developments in the upstream chain.”

Another trader argued, “We are considering skipping to replace our stocks as import ABS prices from South Korea and Taiwan remain quite high even after China’s ABS market stabilized by mid-February and has displayed a stable to softer trend since then. Overall ABS supply, however, is rather limited in Turkey, which would hinder any price cuts for ABS even if styrene and butadiene costs post further drops. Moreover, there are expectations for a rebound in the styrene market over the short term given the upcoming maintenance season.”

Spot styrene and butadiene prices were unchanged at around $1385/ton and $3000/ton, respectively, as of today on FOB Korea basis. The styrene figure still indicated a $45/ton fall on the week despite a gain on Friday. As for ACN, the recent levels were up by around $30/ton on the week to the $1500/ton CFR Far East Asia threshold.