by Manolya Tufan - mtufan@chemorbis.com
European PP, PE markets were not offering attractive netbacks for import suppliers during most of the H2 2020. Yet, another round of 3-digit hikes pushed prices to multi-year highs in February. Players now question if surging prices will attract non-European origins despite ongoing logistics issues.

Since European markets lagged behind the firming of other global markets, regional suppliers opted for exporting their cargos to other outlets during the last quarter of 2020. Having reversed the course as of November, the bullish run in Europe’s PP and PE markets gained momentum from January onwards with 3-digit increases passing on deals.

Imports have been out of the scene for several months not only due to the poor netbacks in Europe but also due to the global container shortage. Import volumes from mainstream suppliers including South Korea, the US and the Middle East remained restricted up till now. On top of this, regional production outages exacerbated supply concerns.

Players also pointed to a strong demand, which was triggered by backlog orders from the automotive and construction sectors as well as a protracted recovery in packaging applications.

Suppliers asked for hikes larger than the monomer outcome as they intend to expand margins further amid tight supplies. Initial February offers emerged with increases of €200-250/ton for LDPE, which is under a more visible upward pressure. LLDPE and HDPE grades indicated smaller hikes of €150-180/ton as these grades are not as short as LDPE.

Meanwhile, PP prices posted hikes of around €150-200/ton amid comments that PPH inj. is tighter than copolymers.

According to the weekly average data on ChemOrbis Price Index, PPH and PPBC inj. prices in Italy and Northwest Europe reached their highest levels not seen since around early August 2015 following February hikes.

When it comes to PE, data showed that spot LDPE prices reached their highest levels not seen since August 2015 in Italy and December 2015 in Northwest Europe.

When looking at the USD equivalence of spot PP and PE prices in Italy, it is seen that the country carries a premium over other global markets, which is rendering the Italian market as a favorable outlet to divert import cargoes especially when considering the upcoming Chinese New Year holidays, which fall on February 12. 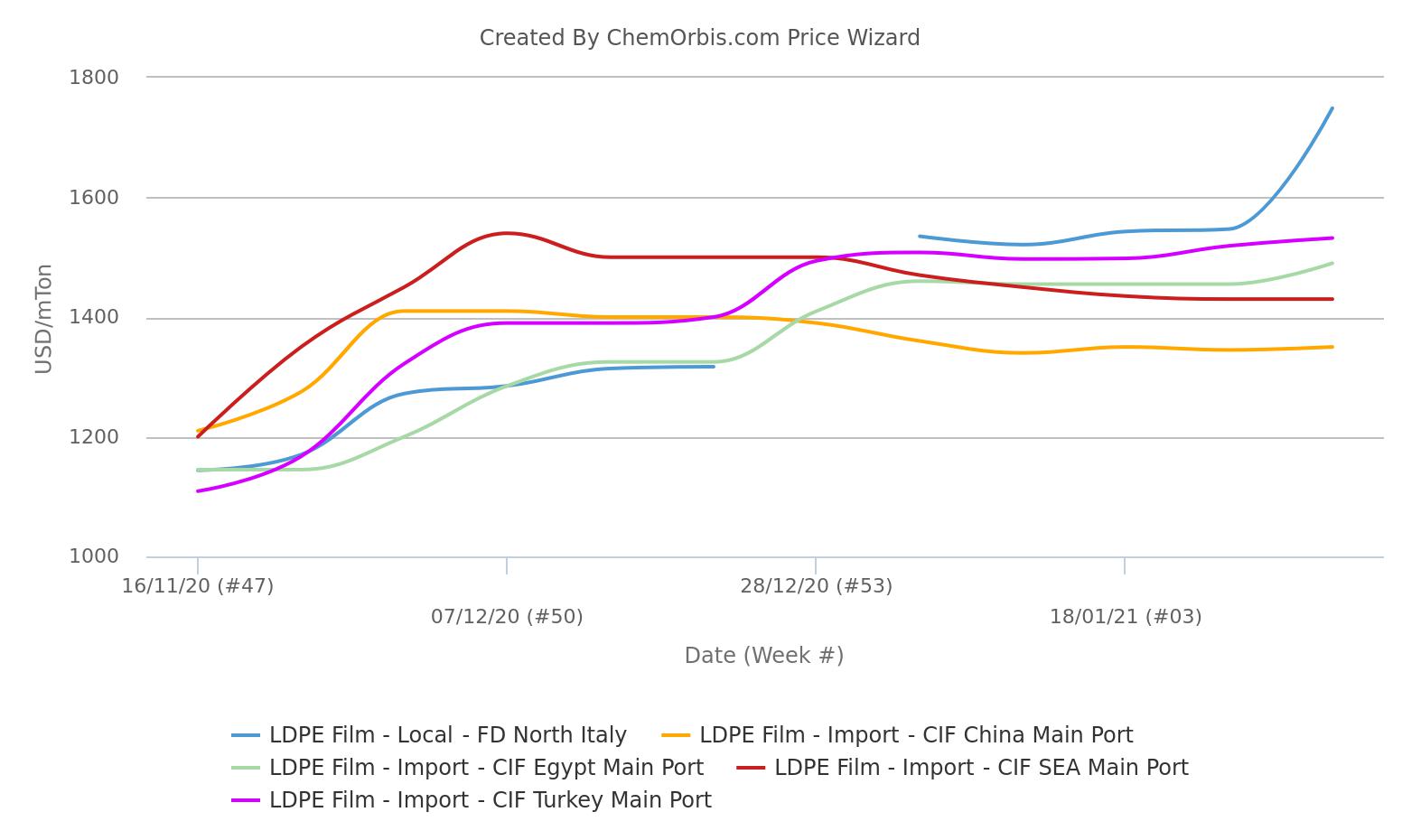 Is resumption of imports feasible?

Nevertheless, there remains the question of whether the resumption of imports is feasible, considering overall tightness across the board.

Moreover, the trajectory of freight rates and shipment problems will be factors to watch. If logistical hurdles prevail, this may prevent exporters from taking advantage of the arbitrage to Europe despite attractive netbacks.