Được viết bởi Nhóm Biên Tập ChemOrbis - content@chemorbis.com
In 2015, Turkey imported a record amount of homo PP, although the yearly gain was rather marginal. Saudi Arabia remained as the number one supplier to Turkey for homo PP whereas there were some remarkable changes in the top 10 suppliers of this past year.

Saudi Arabia maintained the lion’s share of the homo PP market; nevertheless, the country exported 13% less in 2015 than in 2014. Indeed, homo PP imports from Saudi Arabia were at their lowest since 2011, according to ChemOrbis Import Statistics. When looking at the share of Saudi Arabia with respect to the overall imports, it fell to around 33% in 2015 from 38% in 2013-2014 and 47% in 2012.

The most striking gain was in PP imports from Egypt. This origin has been ramping up its market share in Turkey since 2010. Yet, the increase in 2015 was outstanding as the country exported 82% more than in 2014 and stood up to be the 2nd largest supplier.

Iran was ranked as the third largest supplier, meanwhile, in 2015, raising its market share by 17% on the year. Although the jump in Iranian homo PP imports was more noticeable in the past few years, this origin remained in third place in the list of top supplying countries.

Homo PP imports from India shrank by 16% in 2015, which pushed this country down to the 4th largest supplier to Turkey, although this origin was in 2nd place the year before. The fact that a major Indian producer was shut for the most part of the first half of 2015 kept imports from this country relatively limited.

South Korea was the third country that raised its market share, by 12% on the year. This origin, which became the fifth largest supplier in 2015 and even left Greece behind, entered into the list of top ten suppliers only in 2014 in line with the gradual cut in customs duties. In 2014, the customs duty for this origin was initially at 4.3% and then it was gradually reduced to 3.2% in 2015 and 2.1% in 2016.

Imports from Greece, meanwhile, fell by 19% on the year and its position fell to the 6th place in 2015 from the previous year’s 5th position. This origin, which was ranked as the 2nd and 3rd largest supplier of Turkey for homo PP imports between 2008 and 2013, has lost market share steadily since 2013 despite Turkey’s growing appetite for homo PP imports.

Russia and Turkmenistan also came to the forefront in 2015, entering into the list of top ten suppliers respectively from the 7th and 10th place. Russia’s imports even outpaced Israel, which moved down by 14% on the year to the 8th place in 2015. 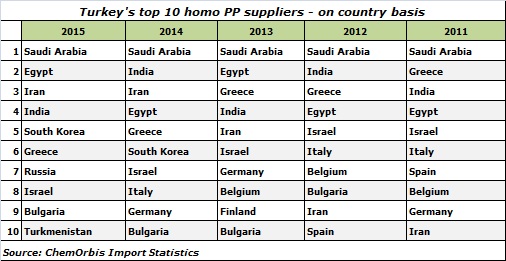 You can visit ChemOrbis Import Statistics to see the exact figures for Turkey’s imports by origin and by product. You can also run your own graphs and make yearly, quarterly and monthly comparisons in ChemOrbis Stats Wizard.